In Novaya Borovaya, a talent school called Art Park and a kindergarten with dinosaur-themed interiors will be built in the coming years. Both objects will be erected at their own expense by the developer A-100 Development. Both facades and interiors inside buildings will be extraordinary.

“DinoSad” for 230 children is already being built in the Tsvetnoy Kvartal. Opposite it, there is another garden – in the concept of a pencil drawing. The new building will be designed in light colors with bright window framing elements. At the same time, the design of both kindergartens will have something in common with each other and be combined with the external appearance of the quarter.

The project was developed by A-100 Development architects. The monolithic-frame building will include three floors with wide corridors and large windows. Each group has its own dressing room, study room and bedroom, and in the latrines all washbasins and sinks will be selected for the average height of preschool children of different ages. For greater safety of children, fenced areas overlook the courtyard of the nearest houses, closed to cars. 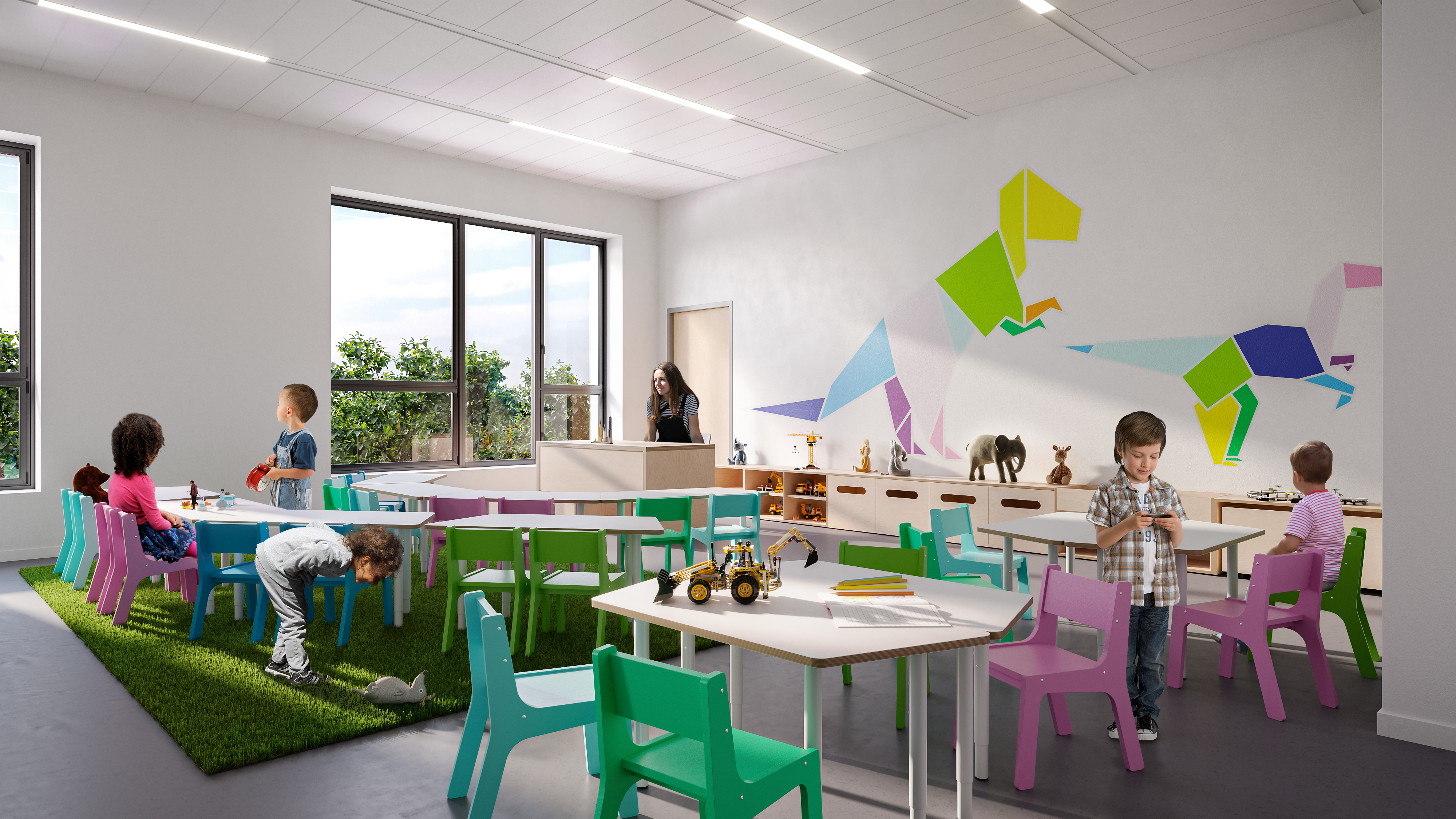 Dinosaurs can be found in corridors and rooms. The concept will also affect the arrangement of playgrounds. The garden will also have a large gym and a concert room for dance and music classes. There will be a kitchen, offices of a psychologist and defectologist. There is also a medical block with several wards.

Art Park School will be dedicated to human talents. Construction will begin in the spring of 2023 in the Central Park quarter. The new buildings will become part of a large complex for two schools, united by a sports area, a single concept of landscaping and a single style of facades.

The school will include three rectangular buildings, slightly turned towards each other. From the outside, it will resemble a compact school campus – a campus. Different buildings with separate entrances will be interconnected by glass galleries with stairs. There is enough space in them for rest, study and events.

The central building will be made public. Its red facade will be decorated with asymmetrically arranged windows of different sizes. And in the building for elementary grades, the windows will receive bright yellow frames that will cheer up children during their studies. Only the building for high school students will be built in a more strict manner.

The school will have themed recreational spaces. In particular, a play space, an art recreation with a magnetic puzzle wall, an amphitheater for future musicians, and a media center for young bloggers have been thought out. In the sports zone, you can play table tennis or read about outstanding athletes, and in the “magic garden” you can get inspired and get creative. Of the unusual – the geosphere for showing spherical films. There is also an exhibition area for expositions of paintings and art objects of schoolchildren.

Everything in the school will be aimed at revealing the abilities of the child. Even the inscription at the entrance will suggest “reveal your talent.” In the corridors, it will be possible to study the biographies of scientists, learn the waltz at the ballet barre, or write on the walls with markers.

The school will have a small and a large gym with stands. There will be a lot of space in the library and assembly hall, and the dining room will remind you of city bistros. Administration offices will be made visually open to blur the line between student and teacher. On the operated roof, recreation areas for junior and senior classes will be created.

The building will be built from prefabricated reinforced concrete structures of the SBK plant, its own A-100 plant. Elevators will be launched between floors and wide staircases will be laid. Around the school organize recreation areas, sports and playgrounds. Innovative solutions will encourage children to spend more time outdoors.

The school will “grow up” at the bus stop, but it will be possible to walk home through the park. There is a car park with a canopy where the child can wait until the parents come for him. There will be bike racks nearby.

“The new school and kindergarten will become a creative environment where children get creative, discover their talents and develop their imagination. The non-standard approach, which we have been using for many years in the architecture of residential buildings, is also perfect for social infrastructure facilities. After all, in the end, we form a comfortable place for the life of adults and children, which is not limited to the walls of the apartment. And for this it is important that all objects are unique, inimitable, so dinosaurs will “settle” in the kindergarten, and the school will turn into an Art Park.— notes Andrey Turubchuk, architect of A-100 Development group of companies.

The dinosaur-themed kindergarten is planned to be completed by the end of 2023. By the end of 2024, the new Art Park school will also be put into operation. 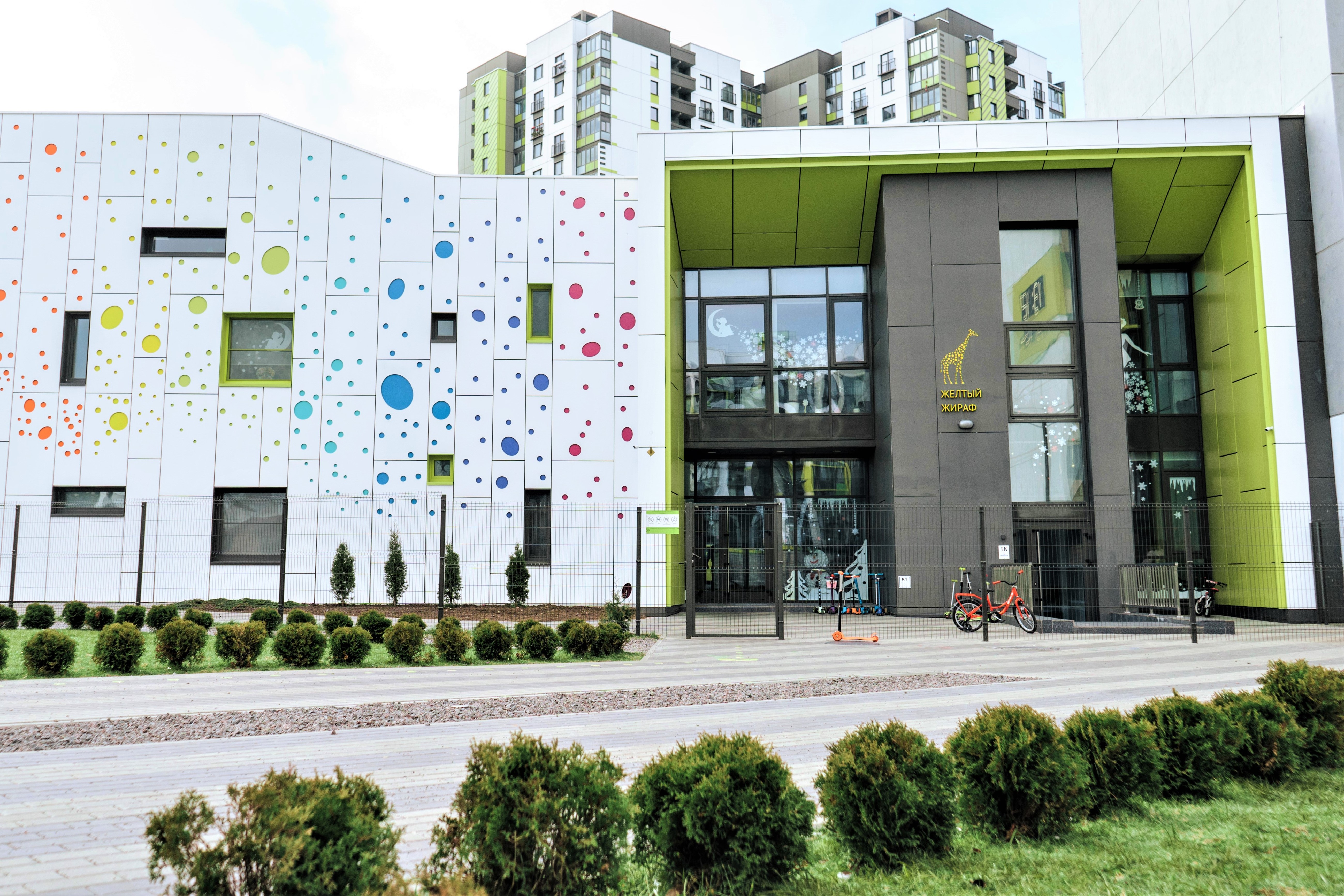 There are already three kindergartens, a school and a sports center in Novaya Borovaya. All these objects stand out for their unusual architecture and content. Thus, the Yellow Giraffe Kindergarten is designed in the theme of a zoo, with a slide in the shape of a giraffe from the second floor to the first. In the kindergarten, “Cosmos” is met by a giant rocket, and inside there are bedrooms with a starry sky and constellations. There are also mini-gardens for children. The school of the future is also true to the concept: scientific exhibits are installed in the halls and in the courtyard, which explain the laws of physics in a playful way.

The A-100 Development developer builds all social facilities at his own expense. The construction of infrastructure is included in the priorities of the district development.