At the beginning of 2020, a scenario was drawn up for Siska’s growth to 90 rubles … reaching 85 ..
The scenario did not materialize a bit … But in general, the movement went where it should be ..
So Q1 went up and I traded almost according to plan, setting limits and stop orders in the evening … most of the time I worked as an electrician at a train station ..
After the breakdown of 72, he got scared of a rollback and started selling straddles, which made it possible to make only 5x, although he could have easily made 10x.
The bitch grew with acceleration throughout the quarter.
The sold straddle brought a loss by expiration.
The main periods of the 1st quarter in the picture:


2nd quarter: a correction started, which I expected … but within 38-50% Fibo, no more.
Therefore, I waited a little and started gaining longs, incl. via sold put spreads.
This tactic was profitable at first, but then I got into a big long position and already went down … By the end of the quarter, I already had to buy insurance in order to reduce the GO and the long saw ate up the depot …
On further correction below the 50% Fibo level, the depot burned out.
At the end of the quarter, I had to add money.
Highlights in the picture: 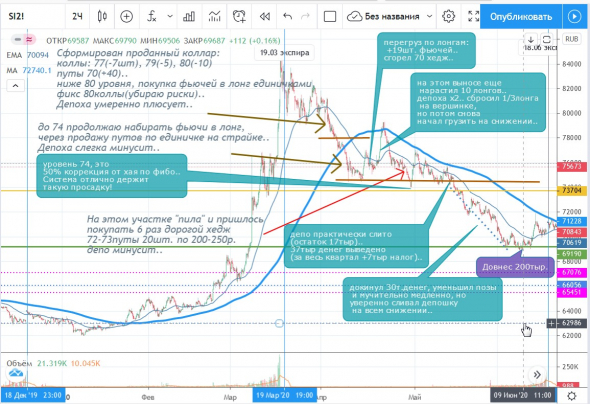 —-
main conclusions:
– in Q1, it was possible not to piss, but to cut futures by 50% and use vertical spreads as boosters.
– in Q2, instead of futures, use purchased collars / albatrosses, and buy insurance immediately beyond 50% of the fibo, but for a month or 2 months.