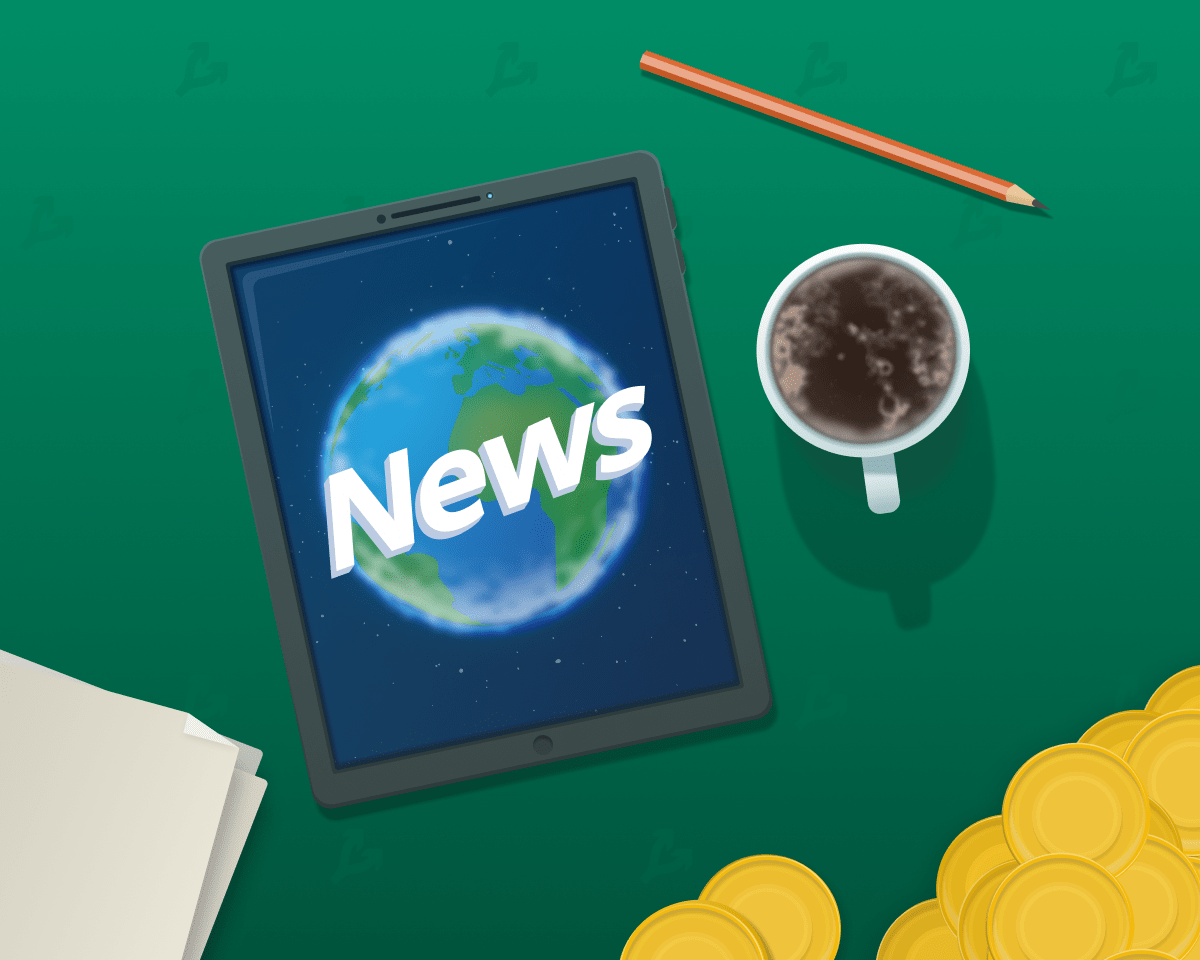 The price of bitcoin has risen above $21,000, Cristiano Ronaldo will issue an NFT on Binance, Solana introduced a Web3 smartphone and other events of the outgoing week.

Contents
1 Bitcoin fixes above $20,000
2 Leading players expressed their readiness to support companies affected by the market decline
3 What about 3AC and Celsius?
4 Do Kwon denies allegations of fraud
5 What’s up with Lido’s stETH?
6 What to discuss with friends?
7 Vitalik Buterin criticized PlanB’s Stock-to-Flow model
8 ZigZag DEX to Airdrop Governance Token
9 dYdX will introduce its own blockchain in the Cosmos ecosystem
10 Hackers attacked Horizon and Convex Finance cross-chain bridge
11 The European Union will finalize the bill on the regulation of cryptocurrencies in June
12 What else to read and see?

Last weekend, bitcoin quotes rose above $20,000 and by the end of the week, the asset managed to gain a foothold above this mark. At the time of writing, the first cryptocurrency is trading near $21,390.

The flagship has traditionally pulled the rest of the market with it. All digital assets from the top 10 by capitalization closed the week in the green zone. Solana (+28.3%), Ethereum (+23.8%) and BNB (+21.7%) showed the best dynamics.

Despite the positive market dynamics, Arcane Research analysts said that the potential for a decrease in the price of bitcoin remains to the level of $10,350.

According to the CoinCodex service, the CEEK VR metaverse token has risen in price the most over the week among moderate-cap digital assets. The price of CEEK rose by 98%.

The native token of the Everscale blockchain platform fell in price more than others. EVER quotes fell 11.5%.

The total capitalization of the cryptocurrency market amounted to $1.01 trillion. The Bitcoin Dominance Index dropped to 40.6%.

The head of Alameda Research and FTX exchange, Sam Bankman-Fried, said he is making efforts to mitigate the negative phenomena in the cryptocurrency market due to the problems of Celsius and Three Arrows Capital (3AC). The very next day, it became known that FTX had provided BlockFi’s lending platform with a $250 million revolving line of credit.

Morgan Creek Digital believes the deal will allow FTX to buy the lending platform “at near zero cost.” To prevent this, the venture company is trying to raise $250 million from investors to buy a controlling stake in BlockFi.

The head of Binance, Changpeng Zhao, said that his company has a “duty” to protect users and help the rest of the industry survive. At the same time, he noted that only “strong” projects are worth saving.

What about 3AC and Celsius?

The co-founder of the online investment platform BnkToTheFuture, Simon Dixon, proposed a plan to rescue the lending service Celsius Network, similar to the recovery of Bitfinex after the hack in 2016.

DeFi project Chainge Finance offered to buy out some of the assets of Celsius Network. According to media reports, Goldman Sachs is also showing interest in the platform. The financial conglomerate allegedly plans to raise $2 billion from investors to buy its portfolio in the event of bankruptcy.

The problems of the 3AC fund affected the broker Voyager Digital. According to media reports, the company demanded ~$650 million worth of crypto assets from the fund for its loan of 15,250 BTC and 350 million USDC. Amid the disclosure, Voyager shares plunged 60%. The next day, the company lowered the daily withdrawal limit for users from $25,000 to $10,000.

Cryptocurrency derivatives platform CoinFLEX joined the list of companies hit by the market downturn this week, suspending user withdrawals due to “extreme market conditions” and “counterparty uncertainty.” The head of the company, Mark Lamb, clarified that the mentioned counterparty is not the Three Arrows Capital hedge fund or “any lending firm.”

On May 24, a spokesman for the Dubai Financial Services Authority stated that 3AC was not licensed to operate in the emirate. The fund had previously planned to relocate its headquarters there.

Do Kwon denies allegations of fraud

Speaking to the WSJ, Terraform Labs (TFL) head Do Kwon said he was not going to comment on any law enforcement investigations. He called the incoming lawsuits “unfounded” and noted that the company intends to defend itself.

According to Do Kwon, due to the collapse of Terra, he lost almost all of his fortune. The head of the TFL added that he does not consider himself a fraudster, since he himself was completely confident in the stability of TerraUSD (UST).

At the same time, a class action lawsuit was filed by Terra investors against Terraform Labs and Do Kwon in the Northern District of California court demanding that they be reimbursed for the purchase price of the tokens.

What’s up with Lido’s stETH?

The community of the DeFi platform MakerDAO has voted to remove Aave from the direct deposit module. The initiative will effectively eliminate the ability for users to borrow DAI using “staking ether” in Lido Finance as collateral.

CoinShares analysts explained why Lido Finance’s staking ether decoupling is different from Terra USD’s loss of parity with the US dollar.

However, the decentralized organization behind the development of Lido has initiated a vote to limit the share of the protocol in the Ethereum 2.0 staking pool.

The authors of the proposal believe that the dominance of Lido will create a threat to the security of the blockchain after the so-called “merger”. The dominance of the protocol has been referred to by some analysts, such as Danny Ryan, as a potential point of centralization.

What to discuss with friends?

Ethereum co-founder Vitalik Buterin supported The Daily Gwei creator Anthony Sassano, who called on PlanB to delete his account due to the failure of the Stock-to-Flow (S2F) model promoted by the latter:

“gloating is impolite, but I think that financial models that give people a false sense of certainty and predestination regarding the growth of asset values ​​are harmful and deserving of ridicule,” wrote Buterin.

Decentralized exchange ZigZag has announced an airdrop for early adopters. The requirements for the recipients of the coins will be determined by the participants of the token sale. The sale of the crypto asset under the ticker ZZ will begin on June 24. 2 million tokens out of a total supply of 100 million coins have been allocated for the token sale. USDC stablecoin will be accepted for payment.

Buyers of the new asset will become members of the ZigZag DAO. One of the first tasks of the decentralized autonomous organization will be to determine the terms of the airdrop.

dYdX will introduce its own blockchain in the Cosmos ecosystem

Decentralized derivatives exchange dYdX announced the creation of its own network using the Cosmos SDK. Its launch will take place as part of the dYdX V4 update, which involves going beyond the Ethereum ecosystem.

The new dYdX network will be controlled by a distributed set of validators, not just the founding team. The update will launch in the coming months.

The Harmony blockchain platform team reported an attack on the Horizon cross-chain bridge, as a result of which an attacker stole assets worth about $100 million. An unknown person withdrew tokens in several transactions, then sent them to another wallet and exchanged them on the Uniswap decentralized exchange.

In another case, an attacker took control of the DNS server of Convex Finance’s DeFi protocol in order to prompt users to approve malicious smart contracts. The project team has changed domain names. Later it became known that the Allbridge, Ribbon Finance and DeFi Saver protocols were similarly affected.

In a comment to ForkLog, Allbridge co-founder Andrei Veliky said that the number of victims reached 23. All of them used the services of the Namecheap domain name registrar. The head of the latter, Richard Kirkendall, wrote on Twitter that the company had identified a “compromised agent” and removed access.

On June 30, 2022, the European Parliament, the European Commission and the Council of the EU will hold a final meeting on the MiCA cryptocurrency regulation bill. Patrick Hansen, development manager at Unstoppable Finance, spoke about this.

He emphasized that all the “important” issues have already been agreed, but there are several open topics such as the supervision of stablecoins and NFTs.

According to Hansen, work on amendments to the regulation on the exchange of information between counterparties, which involve the collection of data on users of non-custodial wallets, may not be completed before the end of the month. The European Parliament does not want to abandon the requirements regarding the mandatory identification of “non-hosting” counterparties by companies when making transactions.

What else to read and see?

Andrey Martsinyak, attorney at Juscutum law firm, told ForkLog why cryptocurrency platforms block user funds and what to do if this happens to you.

A series of educational cards explained how to issue an NFT, what a blockchain oracle is, a wrapped token, and dollar value averaging.

The traditional digest told about the main events of the week in the field of cybersecurity.

The decentralized finance sector continues to attract increased attention from cryptocurrency investors. ForkLog has collected the most important events and news of recent weeks in a digest.

We released a new special report on the nuances of storing cryptocurrencies on wallets.