Home Bitcoin How not to scare away talented employees Why do talents not coexist in the company? Yes, because it is difficult for them when they are not listened to and do not understand. Or they don’t want to understand. Most managers suffer from a kind of delusions of “intellectual grandeur”: they think that they know everything and feel better than their subordinates. This literally closes their “listening” from other views of the world and other points of view. Nikolai Inyakhin and Oleg Afanasiev, co-founder and founder of Interim Business Association, an international organization of interim managers, told how to change yourself and your attitude towards subordinates.

Together with the company Interim Business Group we continue the rubric “Talent management in the company”. This section is published weekly on Wednesday. In them you will find useful information and practical advice on management and talent management.

The phenomenon of “closed hearing”

It seems to us that all people listen in the same way: if you have ears, then you have something to listen to. But it turns out that there are radically different types of listening – Open and Closed.

A closed hearing is a hearing from the Past. This is when a person (subconsciously) “imposes” any information uttered by other people on his life experience and looks for matches. If he finds them, then the information is accepted, and the person who reproduces it is recorded in the “smart” category.

That is why corporations more often “survive” those who can guess what the “boss” needs and serve as a kind of mirror of his “brilliant” ideas. Those who have a point of view that is different from the boss’s point of view are instantly “written” as “toxic”, undermining the authority of the “first person”.

And they leave the company because of their “ruffiness” and “inflexibility”.

A small but vivid example from life. Two friends, who worked as tellers in a bank and served legal entities, involuntarily witnessed a conversation between several deputy chairmen about the need to expand the department for working with corporate clients. The conversation took place in a bank smoking room. The deputy heads believed that for this it was necessary to buy out several employees from other banks. During the conversation, the planned salaries of new employees were announced. Having finished smoking, the girls returned to their workplaces and began to discuss among themselves in what ways they could attract new customers to the bank. The solution was on the surface. An analysis of the transactions of the clients they serve showed what other companies these clients have that are serviced by other banks, as well as with which companies they have partnerships. Having estimated the size of the client bases assigned to them, they came to the conclusion that using a certain banking product and a premium of 50 BYN for each new client, they could attract 10 new clients every month for six months.

For a more distant horizon, they had no ideas yet. They approached their department head and, together with her, presented their idea to the department head. The head of the department reacted to it with enthusiasm and brought it to the Board. Unfortunately, the idea did not fit into the life experience of the Board members and was shelved. Within a year, both girls left the bank and got a job in the sales department of a distribution company, where they became sales leaders, thanks to their moral and business qualities and the head of the department, who knew how to listen to his subordinates.

PS The bank scammed three employees from other banks to the corporate client department. The monthly net salary for each of them amounted to more than 1500 BYN. Their current productivity is 4 new clients per month. Total cost of attracting one client: 1500*48.6%*¾ = 1,671.75 BYN. And the girls offered 50*48.6% = 74.3 BYN. Feel the difference.

Why is a closed hearing of executives harmful for a company?

The company, first of all, loses its creative potential in the form of leaving “uncomfortable” employees. Sooner or later, its ceiling is limited to the ceiling of the “intellectual development” of an authoritarian leader.

The team and the opinion of its members become “not so important”, which means that the responsibility for everything that happens falls on one person – “deaf” to other points of view of the leader.

The basis of this style of leadership, as a rule, is the fear of mistakes of subordinates, distrust of thinking and creative abilities, unwillingness to work together with people to find solutions to pressing problems, that is, unwillingness to think together.

All this “encapsulates” a company or division and creates a suffocating atmosphere of mutual understanding, filled with resentment and hidden aggression, in which, by definition, talents and inventors cannot exist.

From a psychological point of view, the only way to counter this situation is by cultivating open listening.

Open listening is, first of all, listening from the Future, where there is nothing “right” or “wrong”. This is a listening in search of points of view, different from the opinion of the Leader. This is a search for a variety of approaches to solving the same problem.

This is an interest in the inner world of their subordinates, in their thinking process and search strategies.

This is the pleasure of teamwork, “brainstorming”, moderation, “pumping ideas.” This is the organization of a space filled with the energy of collective thought and shared responsibility for the overall result.

The manager’s management style can be determined by the interior of his office. If it does not have a clip chart or a whiteboard with markers, then there is no place for a collaborative thought process. For an unwritten thought does not exist: “They talked, they talked, they sat down and wept!”

If we compare two types of listening, then we can get such a table and turn it into a test for analyzing different types of leadership: authoritarian and command. 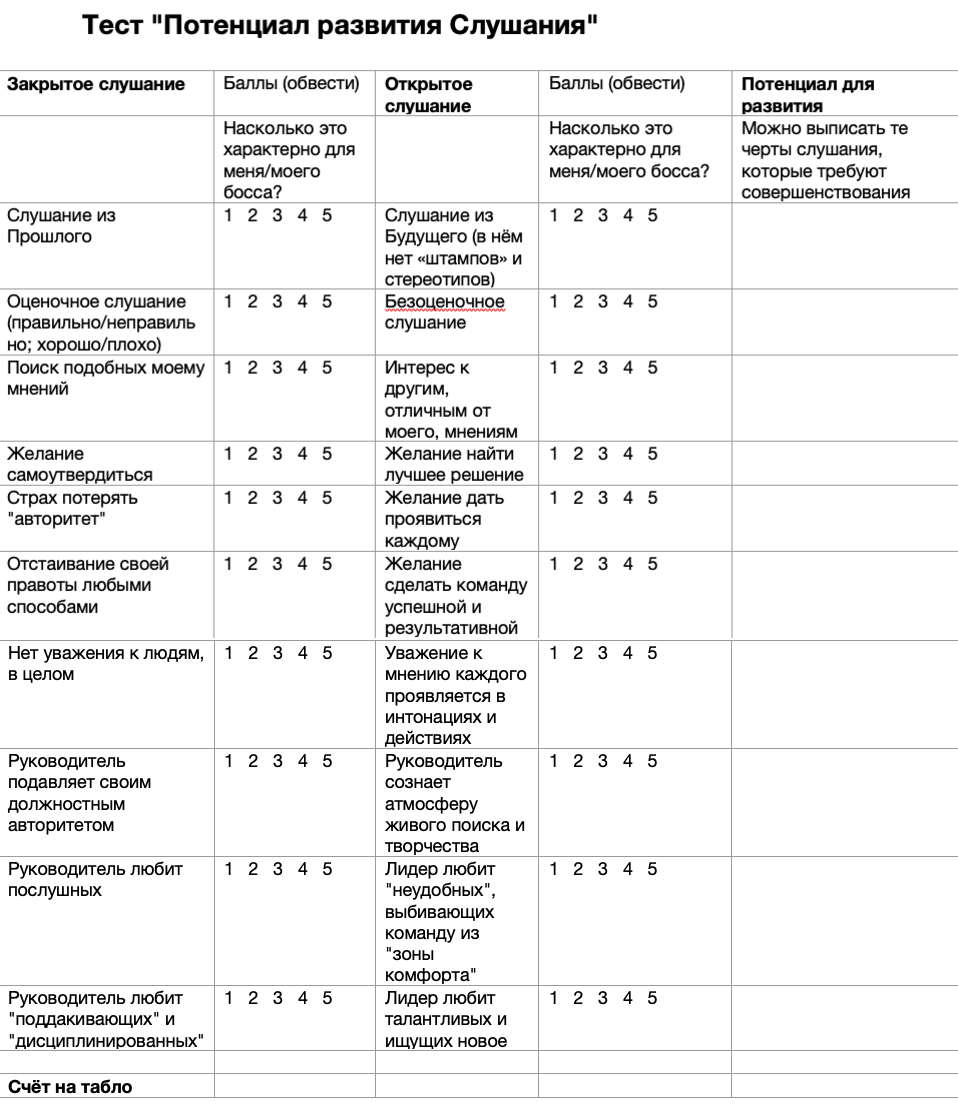 An atmosphere of trust and respect

If we believe that “Talents rule the world”, then an atmosphere of trust and respect is the only space in which they can exist.

One well-known director said in a recent interview that according to the plot of the play, he needed flies on stage. He instructed the props department to ensure their presence in large numbers on stage during the performance. At the same time, he had no doubt that the guys would be able to complete this difficult task, because they had never let him down. It turned out that achieving such an effect is not so simple. Flies live only in the places where they were born. Therefore, the props showed ingenuity and creatively approached the task. They caught flies in different areas of the theater and placed them in special containers around the perimeter of the stage. Each container was equipped with a lid that was easy to open thanks to a rope tied to it. It remains only to appoint those responsible so that the flies are released in a timely manner according to the timing of the performance.

When the head of the props department showed the director the finished design, he was speechless with admiration for the speed, simplicity and elegance of the task. He simply took out his wallet and handed out the award to the entire department, shaking hands with his boss. The boss also, without further ado, responded with a firm handshake and a sincere smile.

Why is this example interesting in revealing our topic? The fact that it is the behavior of leaders that creates the conditions for the disclosure of talents or for their “destruction” in the long term.The culture of management generates an appropriate corporate culture, in which either everyone is interested or everyone is stuffy and disgusting.

Information about the features of the corporate culture of management, voluntarily or not, is distributed in the labor market, as a result of which the company either “attracts” Talents to itself or forces it to “bypass it”.

A toxic corporate culture starts with close listening to leaders and little positive feedback from employees.

Positive “feedback” for talented people is no less important than listening to their opinion. As a rule, these people are very sensitive to injustice. The lack of due attention to their searches and work in general tells them that what they do is not important for the leader.

It seems to many top managers that it is enough to organize regular reviews with an employee to analyze the results of his activities, so that the problem of “feedback” is solved. But it’s not. “Feedback” is not only the content of a conversation with an employee, but it is also the “tone of voice”, the tone of the conversation, in which, in fact, the real attitude of a person to what he says and to whom he says is manifested.

The tone of the conversation

The environmental friendliness of communications in business largely depends on the intonation patterns of the speakers. The same phrase can be pronounced in such a way that a person will forever hate you and his work. And it can be expressed in such a way that it will raise a person’s motivation “to the skies” and increase his enthusiasm for correcting any “mistake”. No wonder some managers take as a rule the phrase “Tough on the problem – soft on the person!”.

If “feedback” turns into banal criticism, then no one can stay in this for a long time. Because with the regular receipt of “psychological injections” in his address, a person loses faith in himself and the correctness of his actions, which in turn leads to an increase in staff turnover in the unit and, in a global sense, the loss of economic efficiency of the company as a whole. Because finding a new subordinate and bringing him to at least the planned level of performance is very difficult and requires a fairly large amount of time. And, as a rule, no one has it. High results are required today and now.

The emotional side of communication

The emotional side of communications plays a decisive role in the “psychological health” of the company. Talented people feel this especially keenly. Knowing their own value and the value of their work, they, as a rule, seek, first of all, a friendly atmosphere and open, fair communication.

If the company’s management neglects this aspect of the life of the organization, then, sooner or later, the team will turn into a “gathering of mediocrities” who do not have their own opinion. How, then, to ensure rapid business growth with them? What does a test mean in trading? Books on team building in business