Kraken users are demanding compensation after severe market disruptions that liquidated leveraged trades amid the sharp pullback recorded in crypto markets on February 22.

It looks like a combination of weak buying activity and cascading liquidations resulted in particularly heavy losses on Kraken – BTC fell 22% below $ 45,000 and ETH fell 64% and found support at $ 700.

Many traders have expressed their frustration with the subreddit r / Krakensupport and are even threatening to file legal action against the exchange. Reddit user u / dtk6802 claims to have lost most of his savings during the flash crash:

I lost most of my savings and did not receive a response from the support team. I think they will return the money or lose all their clients. It’s unpleasant, but I will join the lawsuit with a lot of evidence (screenshots) if I don’t get my money back.

Some have suffered even more, as they not only suffered losses, but also mired in debt: Reddit user u / GoEers304 claims that his balance sheet reflects Kraken’s debt.

Despite calls from Kraken users to make up for the losses, comments on social media say the exchange will not reimburse traders.

Other platforms have also experienced sudden crashes, such as Ethereum crashing on Nexo, with the trading platform tweeting that it will reimburse users for losses:

Dear Nexo users, a disruption of service on the exchange partner’s side resulting in trading anomalies has resulted in the incorrect liquidation of some Nexo clients’ ETH balances. These liquidations will be canceled. We apologize and will keep you updated. Your funds are safe. 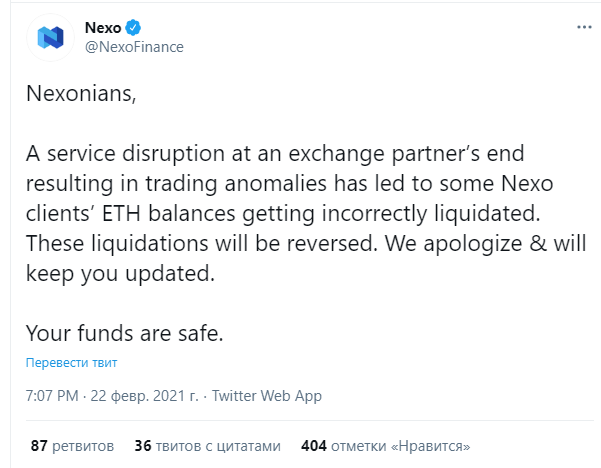 Liquidations are not uncommon during a period of high volatility in cryptocurrency prices. On February 15, a roughly 11% drop in the price of ether resulted in a $ 1.89 billion liquidation in the cryptocurrency markets. Most of the liquidations took place on Binance, with $ 336 million in Ether and $ 55 million in BTC removed from user balances.

Mike Novogratz: We are now at the epicenter of a paradigm shift

Which way will the bitcoin price move?