In recent years, interest in street retail in new, developing residential areas has been noticeable in Minsk. “Such a location is very attractive, since it is closest to the consumer, which is not spoiled by the supply, and does not experience high competitive pressure at the early stages of development of the districts. At the same time, street retail has its own specifics and faces its own problems,” warns partner, NAI Belarus Executive Director Andrei Aleshkin. He told Pro Business what was happening in this market in the third quarter of 2022.

Contents
1 Types of street retail and its features
2 Suggestion: “In some locations, a significant increase in area is expected”
3 “In the street retail of new districts, mass market objects and everyday services are most in demand”
4 Problems of management and operation
5 Vacancy and commercial conditions
6 Read also

Types of street retail and its features

It is customary to separate two main areas of street retail: traditional (aka classic) and street retail of sleeping (residential) areas. The traditional street retail is called so because it is located in historically formed shopping corridors. Champs Elysees in Paris, New Bond Street in London, Fifth Avenue in New York, Via Montenapoleone in Milan – all these names are well known all over the world.

Street retail of new districts is also an important decision in terms of social responsibility. As a rule, public infrastructure is somewhat late before housing construction, as a result of which new settlers are left without elementary trade and consumer services, and other services. Therefore, until large shopping malls, commercial and residential complexes are introduced in the districts, local street retail will effectively replace them. On the basis of the areas in residential buildings or stylobates that unite the houses of residential complexes, shops, bank and post offices, children’s development centers, numerous accessible catering facilities and other important infrastructure for the population are opened.

Street retail of new districts also differs in the form of property ownership. In the traditional segment, despite the auctions for the sale of premises and privatization that have been held since the 1990s, a large number of departmental real estate, communal property under the jurisdiction of the housing and communal services (ZhREO) or the Minsk Spadchyna Municipal Unitary Enterprise still remain. In new residential areas, the developers were, as a rule, private companies, and areas under construction or after its completion were often put up for sale, where the buyers were commercial companies, individual entrepreneurs or individuals.

Suggestion: “In some locations, a significant increase in area is expected”

Street retail of residential areas in Minsk is represented mainly by new development, since the old large “sleepers”, such as Zeleny Lug, Yugo-Zapad, Malinovka, and even newer and more modern ones, Brilevichi, Kamennaya Gorka, were built up with panel housing and did not include in it the first floors taken out of the housing stock. The specifics also affected: it is difficult to provide, with rare exceptions, a room suitable for commercial use in a typical house of one of the KPD series.

And only after the start of large-scale development of commercial housing construction with the widespread use of monolithic and frame-block housing construction, street retail of new areas began to actively develop. Therefore, the main places of street retail concentration were formed in such places as the first building lines of Pobediteley avenues (Lebyazhy district), Dzerzhinsky (Grushevka district and along the site along the South-West and Malinovka); Pritytskogo Street (from the metro station “Sportivnaya” and almost to the exit from the city). On Pritytskogo Street there is a section with a developed street retail of the first line in older houses between Pushkinskaya and Sportivnaya metro stations.

Of course, street retail has been actively developed in areas of complex development in such districts as Mayak Minska, Minsk-Mir, Park Chelyuskintsev. There, in fact, all the first floors of the houses have been removed from the housing stock and are intended for commercial use. In a number of objects, these are complexes united by one- or two-story stillobats, which only expands the possibilities for locating street retail objects.

In total, the street retail of new districts, according to NAI Global, offers more than 215,000 square meters of gross rental space.Moreover, if street retail on Dzerzhinsky and Pobediteley avenues, as well as Pritytsky street is represented mainly by the development of the first line of these transport arteries, then in the Mayak Minska and Minsk-Mir complexes such premises are located in virtually all buildings, including intra-district streets. The residential complex “Mayak Minska” has the highest concentration of interesting objects within the quarter, on Picasso Boulevard. Here the developer tried to bring the space as close as possible to the classic street retail, since Picasso Boulevard is a pedestrian street.

In some locations, a significant increase in area is expected. So on Dzerzhinsky Avenue, a number of residential complexes are under construction on the 1st line of the development of the avenue in the Grushevka area. In particular, one of the complexes provides for the placement of a two-story stylobate along the perimeter of the entire complex, which will significantly increase the supply.

“In the street retail of new districts, mass market objects and everyday services are most in demand”

The demand for space in the street retail of the new districts is very good. This is due to the fact that at an early stage, when large specialized real estate objects have not opened, virtually any object becomes commercially successful. And even later, with the growth of supply and competition, objects either develop a base of regular customers, or change conceptually, but remain in demand.

In the street retail of new districts, mass market objects and everyday services are most in demand. In recent years, in connection with the development of online commerce, street retail facilities increasingly house order pickup points. They are just the most popular in new areas, because, firstly, the infrastructure of stationary trade is not so developed there, and secondly, there is a younger population that uses the services and opportunities of e-commerce to a greater extent.

Another large specific group is stores selling construction, finishing materials, interior goods, as well as interior design studios. This category of operators is expected, since the main audience of consumers of their goods and services is also located here.

Frequent tenants of space in street retail, including new buildings, are also becoming increasingly popular alcohol markets, coffee shops and catering in general. The catering sector has become one of the key players in the street retail commercial space rental market, and in many locations it has become dominant.

We have analyzed some of the street retail corridors of the new districts in detail in terms of functional filling by tenants (operators). It turned out that the largest number of tenants – from the service sector. In this category, the most common are those who can be attributed to the general category of “beauty industry”: hairdressers, barbeshops, manicure studios, makeup artists, multidisciplinary beauty salons … Medical services and travel companies are also quite densely represented.

The number of services aimed at children is growing: general development centers, specialized (speech therapy) rooms, and so on. This is also understandable, because in new areas there is often a shortage of schools and preschool institutions, and children’s art institutions and other similar facilities are geographically remote from these locations, and not all parents are able to regularly take their children there for circles and additional classes.

Financial and insurance services are placed in a separate category. It is rather a tribute to this direction. Previously, cash registers and local branches of banks, currency exchange offices were very common tenants of space in street retail. Now, with the development of digital banking, there is a noticeable reduction not only in centers with full-time employees, but even in ATMs for issuing cash.

Food retail in street retail began to give way to the growing alcohol markets and draft beer stores: roughly speaking, in new areas there are more opportunities to drink than to eat. Among the existing stores, there are fewer familiar chain facilities and more niche, specialized grocery stores. For example, branded stores of some meat processing plants, stores of eco-food and farm products, products exclusively from turkey, exclusive tea drinks, etc.

Problems of management and operation

Obvious shortcomings in the modern street retail of new areas are the problem of unified management, an integrated approach to operating the available commercial space. Thus, most developers are trying to sell commercial premises at the stage of construction of houses or immediately after commissioning, and the further fate of the objects is the problem of new owners. As a result of such an unsystematic approach, situations of unregulated competition arise, when literally within 3-5 minutes of walking distance there are several tenants (operators) of the same type. For example, we can cite a section of Dzerzhinsky Avenue between Khmelevsky and Shchors streets, where 10 alcohol markets and draft beer shops are located. Including 3 competing alcohol markets and one draft beer store located at the same address, as part of one residential building. And in one of the houses there are 2 stores of the same chain at once.

Such situations can be avoided only in the case of a unified management of all commercial real estate in residential complexes, when the pool of tenants is formed by analogy with filling the areas of shopping centers: saturation with a variety of functions and minimization of direct competition, distortions with oversaturation of certain functions. If the developer company is more interested in the sale of commercial premises than in its own operation, it is advisable to try to realize the sale with conditions, to stipulate the boundaries of the functional use of the premises by future owners.

Street retail premises in new districts are in high demand. Actual vacancy is low in all major locations. Thus, there are practically no unoccupied premises in the objects of the first line of development of the considered corridors. In the complex “Mayak Minska” in the free offer you can find premises that look like showcases towards the street. P. Mstislavets (yard driveways), while those overlooking the shop windows on Picasso Boulevard are mostly occupied.

In the Minsk-Mir complex and in some houses (complexes) on Dzerzhinsky Avenue, vacancy exists in houses of recent construction. For example, in those that were put into operation 6-8 months ago, street retail facilities do not function, since the apartments are mostly unoccupied and there is no resource of the local population, which is especially important in places where there are no steady pedestrian flows of the transit population.

On average, the vacancy rate in the street retail of new districts is in the range of 5–7% (starting from 2–3%), i.e. is represented only by individual premises in well-established formed and inhabited corridors, up to approximately 10–12% in those locations where objects have to coexist with ongoing construction.

Typical for the market rental rates are (if we talk in the usual equivalent for the market) 8-12 euros per 1 sq. m. m in less profitable locations and up to 16-22 euros in the formed areas, with a well-equipped infrastructure and an already established flow of visitors. 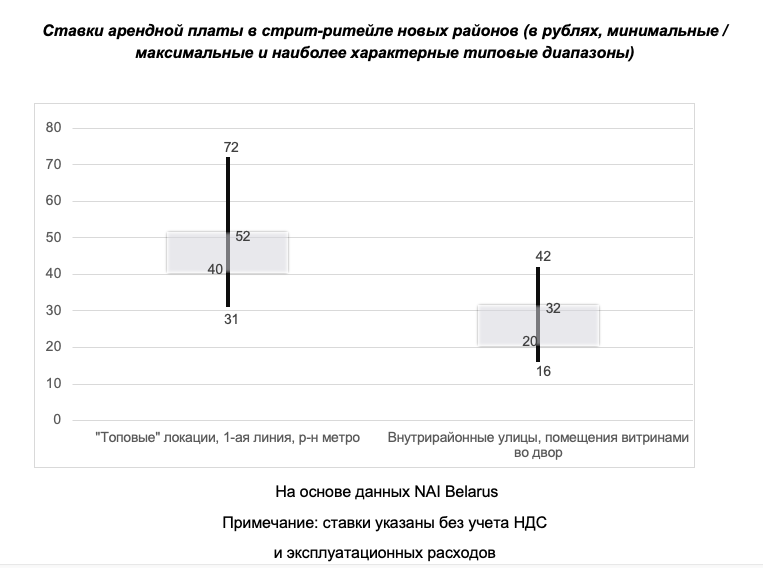